FLEUR DE LIS
the mark of counts and kings

The Florentine lily and sphere are taken from the Medici-crest an represent the hallmarks of this Deumer collection. From the 15th to 18th century, the Medici family from Florence created the most influential Italian dynasty, birthing grand dukes of tuscany, popes and two queens of France. The lilies of the French royal coat of arms were added to the Medici crest by Lorenze de `Medici, called “il Magnifico”, the magnificent, in 1465. He had helped the French King Ludwig XI. out of a massive financial tight spot. Twice a year, Florence is the setting of the most important male fashion exhibition, the PITI UOMO, where Deumer has been an exhibitor for years. 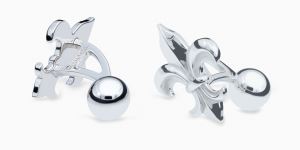 We care. Please write us an E-Mail and let us know, how we can help. We will call you back between 8am and 6pm central european time.

We look forward to helping you create your very special project.